According to this standard, characteristics such as abrasion resistance, cut resistance, tearing strength, puncture resistance, and impact protection are tested. In conjunction with the pictogram, four numbers and one, or two letters, will be displayed. These signs indicate the performance of the glove

The material is subjected to abrasion by sandpaper under a determined pressure. The protection level is indicated on a scale of 1 to 4 depending on the number of turns required until a hole appears in the material. The higher the number is, the better the resistance to abrasion.

The cut protection is tested. A knife is passed over the glove material until it cuts through. The protection level is given by a number between 1 and 5, where 5 indicates the highest cut protection. If the material dulls the knife during this test, the cut test ISO 13997(TDM test) shall be performed instead, see point 5. 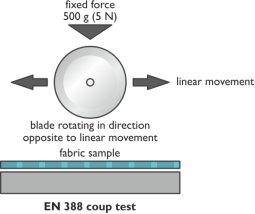 The force required to tear the glove material apart is measured. The protection level is indicated by a number between 1 and 4, where 4 indicates the strongest material.

Based on the amount of force required to puncture the material with a tip. The protection function is indicated by a number between 1 and 4, where 4 indicates the strongest material.

If the knife gets dull during the coup test, see point 2, this test shall be performed instead. The result is given by a letter, A to F, where F indicates the highest level of protection. If any of these letters is given, this method determines the protection level instead of the coup test. 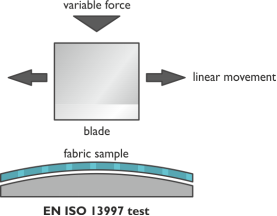 ISO 13997B1999 – Determination of resistance to cutting by sharp objects

Coated work gloves, can be understood as simple chemical protection on textile gloves of different materials and a layer of rubber material on them to

Types of Latex Coated Gloves According to the type of the latex surface itself and thus the manufacturing process, latex coated gloves can have crinkle

Get For A Free Quote

Any inquiry, we will reply within 24 hours